February 19, 2019
On Sunday, February the 10th, African leaders unveiled the statue of the late Emperor Haile Selassie ahead of the annual African Union summit in Addis Ababa. Although Haile Selassie was involved in helping establish the African Union in 1963, he was actively involved in the cold-blooded murder of many civilians in Eritrea between 1961 to 1974. Thus the statue should be removed in respect of the African people.

To those who argue Haile Selassie was a Pan-Africanist. He was a murderer who forced many African indigenous, especially Eritreans to flee their homeland and ultimately scattered around the world to avoid his brutal dictatorship. Haile Selassie chanted “We need Eritrea’s land, not its people” as he sent his soldiers to burn villages and murder children, women and men. In 1962, Haile Selassie violation United Nation resolution in which he annexed Eritrea with Ethiopia that has led to 30 years of bloody war.

In 1967 in just five months period, Haile Selassie soldiers burned and leveled as many as 350 villages to the ground, massacred an estimated 950 civilians and more than 65,000 livestock was slaughtered by machine guns. Tenth of thousands were forced to flee and seek refuge in Eastern Sudan refugee camps. Haile Selassie was known for his barbaric acts. To instill fear, he hanged many men in the city of Keren and left their body for days for people to see.

Getty image: Civilians hanged for days in the city of Keren main street to create fear among the people.

Haile Selassie is not worthy of remembering because of his evil deeds. Rather he should be tried for the crimes he committed against humanity. To erect a statue for the murderous Haile Selassie should not be seen any different than to erect Hitler statue in Brussels.

The African Union should be ashamed for recognizing Haile Selassie who committed many massacres. But again who does the African Union work for. Certainly not the African people. The African Union in its more than half a century years, it has become a getaway for corrupt dictators that only care about their offshore accounts. It has created a shield for criminals from getting indicted at the International Criminal Court. In today's African Union member countries, more than two-thirds are led by corrupt dictators. Most of the poorest nations in the world are in Africa all due to lack of management, corruption, and unjust oppressive leaders. These are the leaders who unveiled the statue of another one like them. We should not be surprised if we witness more dictators statue erected in Africa. 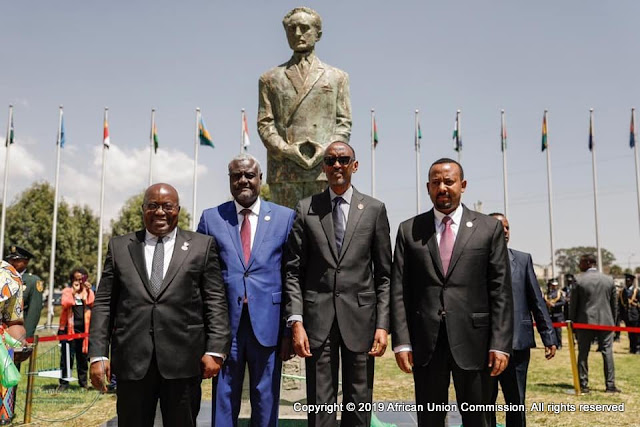 Like the South African youth who championed and succeeded in removing the statue of their oppressors from the Apartheid era,  the Eritrean youth of today and the future, we shall not rest until the statue of Haile Selassie is removed from the African Union headquarters or demand the headquarters be moved elsewhere.

To the many Rastafarian who worships Haile Selassie as their god, I urge you to visit the history of this ruthless leader than to be blindsided by nature’s incidental moments. Haile Selassie was a Cold-Blooded Murderer!

It was on a cold, snowy winter that I went to visit my longtime mentor distinguished Ghanaian political economist professor George Ayittey at his Washington Office. His office, which he runs the Free Africa Foundation is a few blocks away from the White House and the Congress building. On his wall he kept many photos over the years that he had taken with high profile politicians, musicians, African made crafts and awards he received. In 2008, Prof. Ayittey was nominated as top 100 public intellectuals by Foreign Policy. He was an advisor to the Secretary of State on African policy during the Obama administration. He went on to shape African politics, economics, and investment, by appearing on many international channels and wrote some of the most influential books on Africa. To mention a few are Defeating Dictators and Africa Unchained .  For a long time, our communication was via telephone. On one of my trip to Washington DC, I made it my mission to go and meet him, which
Read more